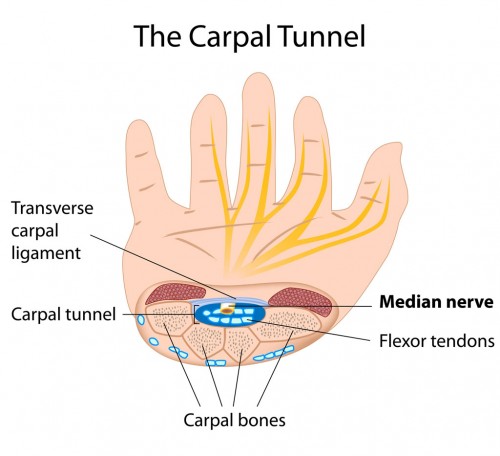 Anatomy of the Carpal Tunnel

In order to understand carpal tunnel syndrome, it’s important to understand the anatomy of the hand—namely the carpal tunnel. The carpal tunnel is a narrow passageway or channel located on the palm side of the wrist. It is comprised of eight bones—called carpals—that form an arch creating three rigid walls of the channel. A band of tissue—called the transverse carpal ligament—covers this arch, forming a “roof” over the channel. This tunnel protects the median nerve, which is the main nerve to the hand and the nine tendons that bend the fingers and thumb.

The median nerve is important because it controls sensations to the palm side of the thumb and first three fingers (not the little finger) and impulses to some of the small muscles in the hand that enable movement in the fingers and thumb. 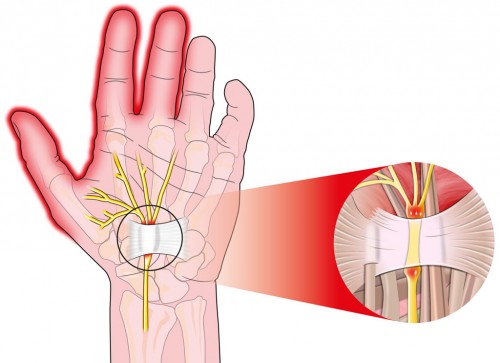 Carpal tunnel syndrome may begin with a gradual onset of numbness and tingling in the thumb, index, and middle fingers (but not the little finger). The numbness may come and go. Some people experience pain in the arm between the hand and the elbow.

Factors that can lead to carpal tunnel syndrome include:

The median nerve can only withstand a small amount of pressure for a short time. Anything that crowds, irritates or compresses the median nerve over time can lead to carpal tunnel syndrome. 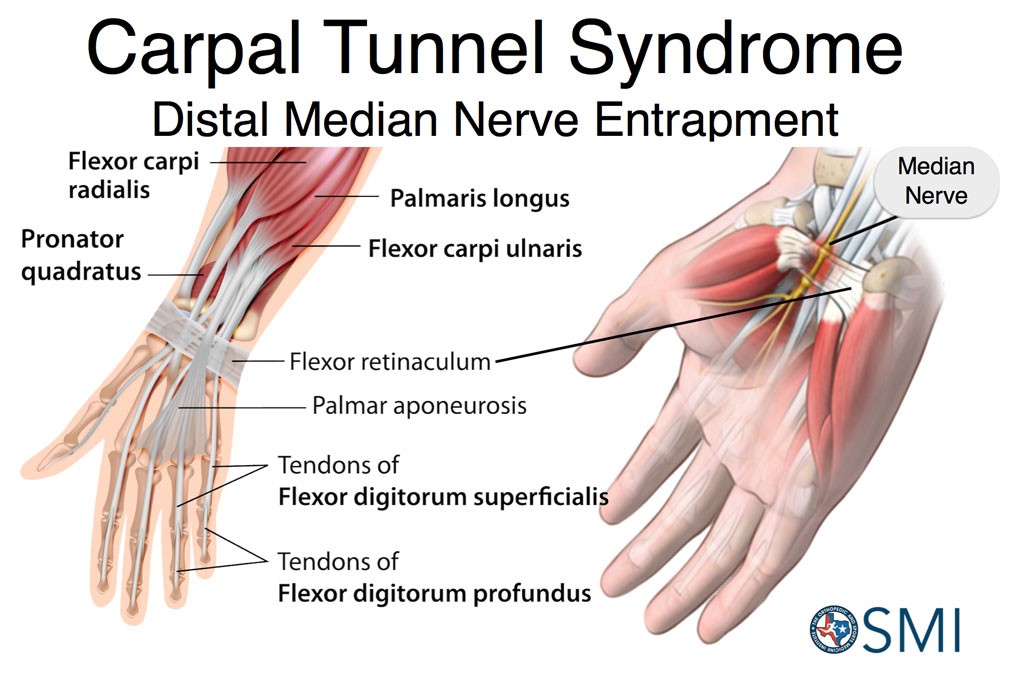 Early diagnosis of carpal tunnel syndrome is important to avoid permanent damage to the median nerve and to prevent the condition from worsening.

Diagnosis may involve some or all of the following:

Phalen’s Maneuver: This is a wrist-flexion test that requires a patient to hold the forearms upright with the wrist bent and the fingers pointing down and pressing the backs of the hands together. If the added pressure on the nerve creates tingling or numbness, carpal tunnel syndrome may be present.​

Tinel’s Sign: During this test, the doctor gently taps on or presses on the median nerve in the wrist. If the patient experiences tingling in the fingers or shock-like sensations, carpal tunnel syndrome may be present.

Of course, it’s important to treat underlying causes, such as diabetes or hypothyroidism, first.

There are a variety of non-surgical approaches for treating carpal tunnel syndrome:

Surgery for carpal tunnel syndrome is called carpal tunnel release and is one of the most common surgical procedures in the United States. There are two ways to perform the procedure:

Regardless of which procedure is performed, it is typically a short, 30-minute procedure performed in an outpatient setting. Both techniques have high success rates and 90 percent of patients experience relief of symptoms.

Recovery from carpal tunnel syndrome takes time and may require permanent lifestyle changes. With non-surgical treatment, relief of symptoms can take days, weeks, or months. Patients may need to decrease their use of repetitive motions and build more rest into their day. Patients who undergo surgical treatment may notice relief of symptoms within days—but it can take months to fully recover.

If you have Carpal Tunnel Syndrome, or even mild wrist or hand discomfort that you would like to relieve, choose our team of hand, wrist and elbow orthopedic and sports medicine specialists that offer state-of-the-art treatment and highly personalized care, contact the OSMI office or call 817-529-1900 today!