Cubital Tunnel Syndrome (Ulnar Nerve Entrapment) is the second most common nerve compression condition that afflicts the arm, (the first being Carpal Tunnel Syndrome). Cubital tunnel occurs with an increase in pressure on the ulnar nerve at the elbow. This pressure results in considerable discomfort on the elbow and the arm, and in some cases can limit function of the hand. The pain is similar to that of the discomfort experienced when a person hits their funny bone. When this occurs, it is actually the ulnar nerve that is hit, the same nerve afflicted by cubital tunnel. This condition often occurs in people whose jobs require frequent repetitive elbow movements and prolonged flexion. It is usually a condition seen more in males than females. 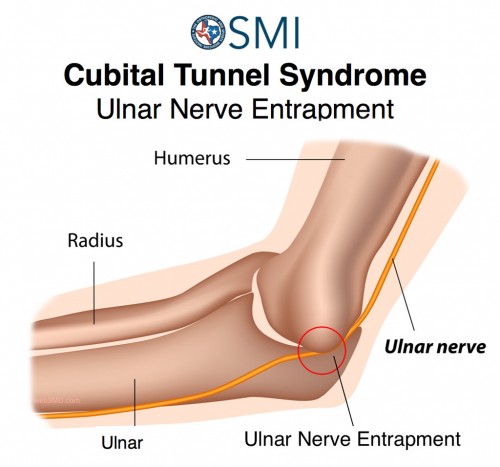 Cubital tunnel syndrome is the result of increased pressure or irritation on the ulnar nerve, i.e. ulnar nerve entrapment. The ulnar nerve begins at the neck, and travels down the spine to the arm and the hand. The ulnar nerve passes through an area called the cubital tunnel which is located just behind the inside edge of the elbow. The tunnel is made up of muscle, ligament and bone.

When the arm is bent for a prolonged period of time, the ulnar nerve is stretched across the inside of the elbow and compression and irritation can occur. The ulnar nerve runs all the way down the arm into the hand and supplies feeling to the little finger and the ring finger, and also controls the small muscles of the hand.

Cubital tunnel syndrome can be caused by a number of things, and part of the issue lies in the function of the elbow, and how this affects the ulnar nerve. When the elbow is bent, the ulnar nerve actually stretches a number of millimeters, and when this occurs, the nerve can shift or even snap over the bony part of the elbow. Repeated occurrence of this can cause excessive irritation.

The following things can be the cause of this irritation:

Cubital tunnel symptoms can develop over a long period of time, but usually beginning with numbness or tingling on the inside of the forearm, extending into the hand. Following symptoms include:

Cubital tunnel syndrome can be diagnosed by either a physician or a physical therapist from the Fort Worth Hand Therapy Center will usually carry out an in-depth evaluation to establish the cause of the discomfort and to rule out the possibility that the pain may source from the start of the nerve, in the neck. Once this is clearly established, and the physician or physical therapist is certain that the problem pertains to the ulnar nerve; he or she will carry out one or a number of the following examinations:

If cubital tunnel symptoms are recognized early and the cause is identified, the condition will most likely cure itself, providing the patient ceases to do whatever has been causing the condition in the first place. Anti-inflammatory medications can also serve as a temporary symptom blocker if the need arises, though this should not be done in place of ceasing the activity that has exacerbated the condition. In some patients, the symptoms can worsen at night, causing discomfort when lying down, making it difficult to sleep. In this case, patients can try using a plastic arm splint or athletic elbow pad to limit the movement of the elbow during sleep. An athletic pad could also be used during the day to protect the nerve and reduce pressure on this area.

A hand physical therapist may also be able to help by giving the patient exercises to do that will increase wasted muscle strength and reduce pressure on the nerve. However, if non-surgical options do not work, a physician may recommend a patient for surgery to cease damage to the ulnar nerve. The goal of the surgery is to reduce pressure from the ulnar nerve where it passes through the cubital tunnel.

There are two types of surgery for this purpose:

This procedure involves the surgeon forming a new tunnel from the muscles of the forearm. Following this, the ulnar nerve is move out of the cubital tunnel and placed in the new tunnel.

This method simply involves complete removal on the medial epicondyle on the inside edge of the elbow, allowing the ulnar nerve more space to slide through the cubital tunnel without pressure from the bony bump.

If you are suffering from pain relating to the funny bone (Cubital Tunnel Syndrome) that is causing discomfort in the elbow or all the way down the arm, make an appointment with our team of hand, wrist and elbow orthopedic and sports medicine specialists that offer state-of-the-art treatment and highly personalized care, contact the OSMI office or call 817-529-1900 today!